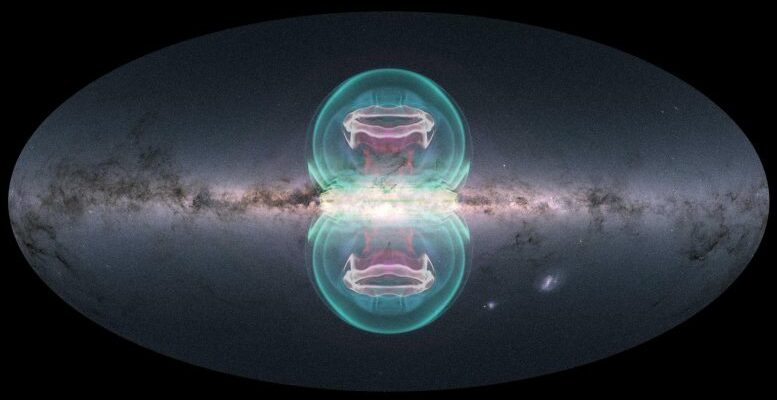 In 2020, the X-ray telescope eRosita took images of two enormous bubbles extending far above and below the center of our galaxy.

Since then, astronomers have debated their origin. Now, a study including University of Michigan research suggests the bubbles are a result of a powerful jet of activity from the supermassive black hole at the center of the Milky Way. The study, published in Nature Astronomy, also shows the jet began spewing out material about 2.6 million years ago, and lasted about 100,000 years.

The team’s results suggest that Fermi bubbles, discovered in 2010, and microwave haze—a fog of charged particles roughly at the center of the galaxy—were formed by the same jet of energy from the supermassive black hole. The study was led by the National Tsing Hua University in collaboration with U-M and the University of Wisconsin.

“Our findings are important in the sense that we need to understand how black holes interact with the galaxies that they are inside, because this interaction allows these black holes to grow in a controlled fashion as opposed to grow uncontrollably,” said U-M astronomer Mateusz Ruszkowski, a co-author of the study. “If you believe in the model of these Fermi or eRosita bubbles as being driven by supermassive black holes, you can start answering these profound questions.”

There are two competing models that explain these bubbles, called Fermi and eRosita bubbles after the telescopes that named them, says Ruszkowski. The first suggests that the outflow is driven by a nuclear starburst, in which a star explodes in a supernova and expels material. The second model, which the team’s findings support, suggests that these outflows are driven by energy thrown out from a supermassive black hole at the center of our galaxy.

These outflows from black holes occur when material travels toward the black hole, but never crosses the black hole’s event horizon, or the mathematical surface below which nothing can escape. Because some of this material is thrown back into space, black holes don’t grow uncontrollably. But the energy thrown from the black hole does displace material near the black hole, creating these large bubbles.

The structures themselves are 11 kiloparsecs tall. One parsec is equivalent to 3.26 light-years, or about three times the distance that light travels over the course of a year. The structures, then, are nearly 36,000 light-years tall.

For comparison, the Milky Way galaxy is 30 kiloparsecs in diameter, and our solar system resides about 8 kiloparsecs from the center of the galaxy. The eRosita bubbles are about two times the size of the Fermi bubbles and are expanded by the wave of energy, or a shockwave, pushed out by the Fermi bubbles, according to the researchers.

Astronomers are interested in the observation of these eRosita bubbles in particular because they occur in our own galactic backyard as opposed to objects in a different galaxy or at extreme cosmological distance. Our proximity to the outflows means astronomers can collect an enormous amount of data, Ruszkowski says. This data can tell astronomers the amount of energy in the jet from the black hole, how long this energy was injected and what material comprises the bubbles.

“We not only can rule out the starburst model, but we can also fine tune the parameters that are needed to produce the same images, or something very similar to what’s in the sky, within that supermassive black hole model,” Ruszkowski said. “We can better constrain certain things, such as how much energy was pumped in, what’s inside these bubbles and how long was the energy injected in order to produce these bubbles.”

What’s inside them? Cosmic rays, a form of high-energy radiation. The eRosita bubbles enclose the Fermi bubbles, the contents of which are unknown. But the researchers’ models can predict the amount of cosmic rays inside each of the structures. The energy injection from the black hole inflated the bubbles, and the energy itself was in the form of kinetic, thermal and cosmic ray energy. Of these forms of energy, the Fermi mission could only detect the gamma ray signal of the cosmic rays.

Karen Yang, lead author of the study and an assistant professor at the National Tsing Hua University in Taiwan, began working on an early version of the code used in the modeling in this paper as a postdoctoral researcher at U-M with Ruszkowski. To arrive at their conclusions, the researchers performed numerical simulations of energy release that take into account hydrodynamics, gravity and cosmic rays.

“Our simulation is unique in that it takes into account the interaction between the cosmic rays and gas within the Milky Way. The cosmic rays, injected with the jets of the black hole, expand and form the Fermi bubbles that shine in gamma rays,” Yang said.

“The same explosion pushes gas away from the Galactic center and forms a shock wave that is observed as the eRosita bubbles. The new observation of the eRosita bubbles has allowed us to more accurately constrain the duration of the black hole activity, and better understand the past history of our own galaxy.”

The researchers’ model rules out the nuclear starburst theory because the typical duration of a nuclear starburst, and therefore the length of time into which a starburst would inject the energy that forms the bubbles, is about 10 million years, according to study co-author Ellen Zweibel, professor of astronomy and physics at University of Wisconsin.

“On the other hand, our active black hole model accurately predicts the relative sizes of the eRosita x-ray bubbles and the Fermi gamma ray bubbles, provided the energy injection time is about one percent of that, or one tenth of a million years,” Zweibel said.

“Injecting energy over 10 million years would produce bubbles with a completely different appearance. It’s the opportunity to compare the x-ray and gamma ray bubbles which provides the crucial previously missing piece.” 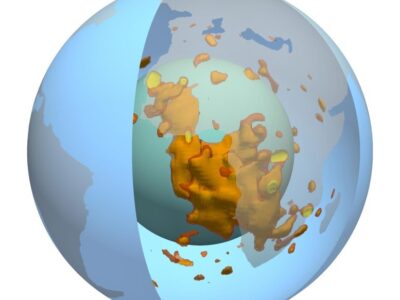